Recently, a Mentor of mine, passed away unexpectedly. Walter was in his mid 70s when he went for a run where he suffered a heart attack.

When I went to the funeral, everyone kept saying how lucky he was.

Then, each person would say- My Father suffered from Alzheimer’s for years or so-and-so had cancer for 9 years or Betty couldn’t breathe on her own for the last 4 months… At least, Walter was doing something he loved when he went.

A few days later, I was able to process that yes – Walter was lucky. It wasn’t just because he passed away quickly and painlessly, which is what everyone hopes for.

He was lucky because he figured out how to live happily.

[Tweet “He was lucky because he figured out how to live happily.”]

Walter was my Speaking Mentor and a spirited member of Toastmasters where we met. Toastmasters is an international club whose motto is “Where Leaders are made”. And the mission is to “Empower individuals to become more effective communicators and leaders.” I had the opportunity to hear Walter give some speeches on a variety of topics. In one, he spoke of how he had not always been happy and that through experience he changed how he lived. He alluded that these changes did not happen until he was retired.

I’m sure we can all relate that it rarely works out that way.

Walter enjoyed life and loved to share his passions of public speaking and ballooning. Who do you know that is a balloonist?! He was a Mentor to many, which came light as people came to pay their respect at his funeral and the months following where people shared their experiences with him. 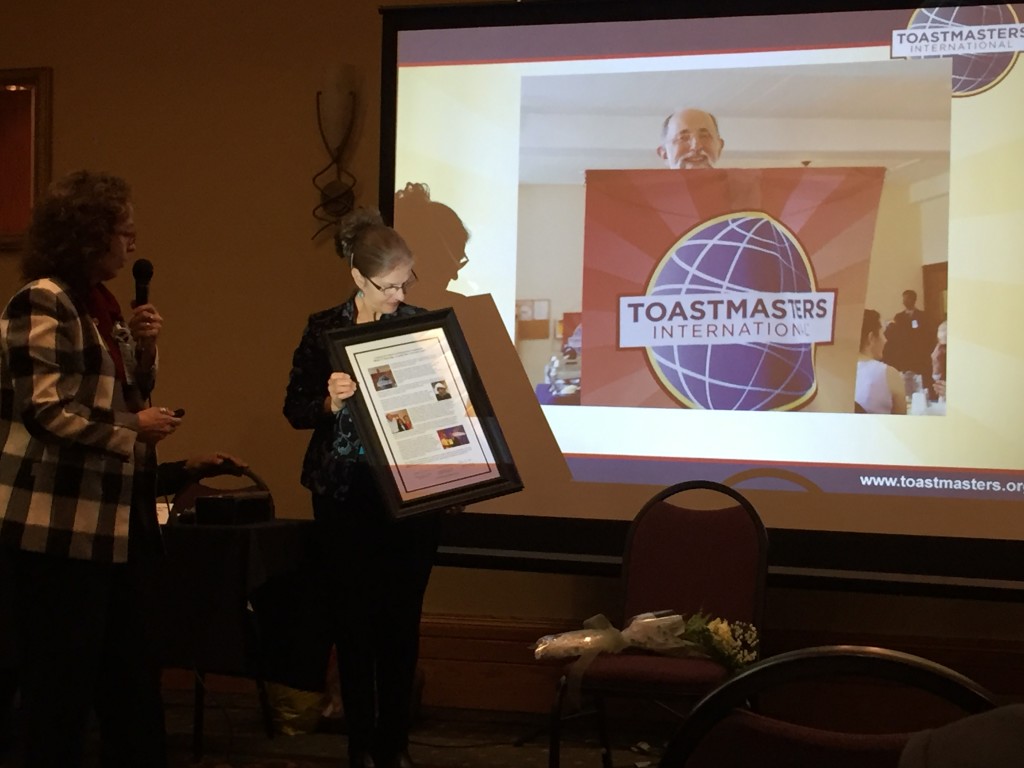 Walter’s wife, Carolyn, accepting a recognition of Walter at the Toastmasters District 53 Conference

As my Speaking Mentor, Walter taught me how to write and deliver a speech. Technically he helped me. But, he really helped me by encouraging me to step into leadership in a different way than I had ever before.

When I came into the Club, he took me under his wing. He made sure to know what I wanted to accomplish and then pushed me further by suggesting opportunities that I hadn’t even dreamed of. He was there to support me to reach my goals by offering advice, providing me with information, and introducing me to people who could help me where he couldn’t. He did this for all of us.

This year, I am President of our club the Taconic Toastmasters. THIS, did not come easily. You see, I had to run against Walter in order to secure this position.

During one of our meetings leading up to the election, somehow the great idea of having the two of us stand up and give impromptu speeches on “WHY You Should Elect Me” in the spirit of electoral debate was proposed.

I was caught off guard, as I was completely unprepared. (A debate?! Wait. What are we doing?) Not Walter. He leapt up out of his seat and immediately began “Fellow Toastmasters, I should be your President because…” His speech was eloquent, poised, inspired, and so motivating! It was everything that you would want in a President and he delivered it perfectly. I was on the other side of the room, internally cursing, knowing I had just lost this debate before it had even begun.

After the meeting, I went up to Walter and said- “I concede. You can be President. You won that fair and square.” With that twinkle in his eye and smile on his face, Walter said to me—“No. You be President. All that is fun for me. I just really enjoy the challenge of getting up there and speaking. It’s just so much fun! You will do a fine job of being President.”

This embodies Walter’s spirit so well. He was completely supportive, a true educator and leader. He had such zest for life. He really knew how to enjoy himself and get you excited about the things he loved.

He was the person to show up at Toastmaster’s Contest as a Judge and literally dress like a judge with white wig and robe. How fun! Around the Holidays, he wore Christmas socks, red suspenders, and a Santa hat. Such spirit! This past summer, he did a Fun Run, where part of the course involved sliding down a huge inflatable slide. (Remember, he was in his 70s!) The following week, he wore his medal to our meeting. He wanted you to ask him about it so he could share his experience.

He did this all the time. He loved to engage with new people. He regularly wore a Toastmaster’s button that said—Ask Me about Toastmasters. He was so passionate about our group that he would go out into the community and spread awareness about what we do. He was also passionate about making sure that all people had access to this resource despite their economic situation or mental health. He volunteered at a local prison where he taught the members to speak in public and encouraged them to make positive changes in their lives. One of the inmates wrote a poem of appreciation that was framed and given to Walter’s wife at his funeral.

In the spirit of Toastmasters, Walter truly embodied what it means to- Empower individuals to become more effective communicators and leaders.

Walter was lucky because he figured out how to live happily.

By design, he made the decision to embrace life and to show up completely. He gave back to the world with his knowledge and support, which he also benefited from by sharing in people’s success.

I am truly grateful to have had him as my Mentor and a part of my life. I know a lot of people feel the same way.

Mentors are an important part of our lives. Please share, below, a Mentor who has influenced your life.